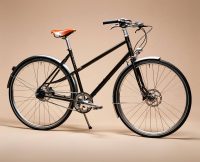 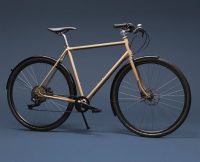 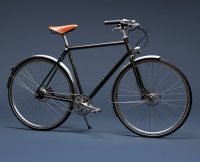 Build-A-Pelago , the invitational challenge to passionate bicycle framebuilders is going full speed ahead and the frame builders have been working their assess off. We are introducing all the builders as the spring moves on and next in line is Eetu Pajala, a 38-year-old windpark-builder from Helsinki, Finland. Building windparks and bicycles? Nice combo, Eetu!

When did you start building frames and why?

I may have chopped and reassembled my first frame in 2013. Since then I got a little more serious, but I only build a couple frames a year. I suppose, when I started I was broke and needed a certain kind of bike. Then I felt like improving on it. After a while you are not really improving the bike, but yourself. You start noticing small things in the geometry and fit of bikes and it really quite interesting. Some things a purely aesthetic decisions but there are a lot of structural decisions that limit the build, like how to fit a certain crankset or brakes on the frame. My way of life seems to be failing in everything in order to improve the next time and that forces me to keep on building.

What excites you right now?

I’ve been working on split bike designs for a couple of years now. I used to travel for work a lot and lugging around a bicycle at airports and in trains was tough. I actually finished two split bikes and managed to travel for a holiday in Japan just as the epidemic was starting. We were in Osaka in mid March and my girlfriend was worried that Finland would be closed off and we’d be stuck in Japan forever. But the bikes work perfectly and we saved a ton in luggage fees. It was pretty interesting how everyone in Finland was interested in my girlfriend’s 20” split minivelo, but in Japan minivelos are super normal and my 650b split stavanger got the attention. My personal opinion is that there is a shift coming in wheel sizes towards 26” – it’s a versatile size that doesn’t cause so many clearance issues with smaller frames.

Biggest dream as a builder?

That my bicycle frames were still ridden a hundred years from now. I have my grandfather’s first bicycle hanging on the wall of a workshop, waiting to be refurbished and I have no idea who made it, but they did a great job.

Biggest nightmare as a builder?

My fork failing catastrophically under someone (else). Pretty much anything on a steel frame can go wonky and it is annoying at worst, but you’re in for a pretty intensive dental job if a fork breaks while riding.

I built a fixedgear frame specifically for the 2016 European Cycle Messenger Championships in Copenhagen. In the main race I was 36th and the second fastest Finn. That was pretty great feeling, the combination of engineering and physical prowess I will likely never surpass.

What distinguishes you from other builders?

We all have our baggage. Mine is that I come from a small town, where the closest piece of asphalt was the highway number 8. We had two tv channels and missed out on Teenage Mutant Ninja Turtles, GI Joe and the lot. In the winter my playground was our garage, where my father had a metal shop. That’s where I learned that if I needed something, I should make it myself (money was tight in the early nineties in Finland). And I would never ever ask for help from anyone. So yeah, my distinguishing features are that I overcritizise myself and am unable to accept help from anyone.

Where will you be in five years?

I don’t have a five year plan, but things I’d like to achieve are building my own machine shop and maybe get a master’s degree in engineering. I’m thinking my thesis could be about applying Lean principles to a bicycle workshop.

Thank you Eetu! See more about Eetu and his works here!